Puppies in the yard, all at play,

Then one day came Mrs. Gray.

The kennel owner said, and put the pup in a crate.

He put in some water and kibbles to eat. 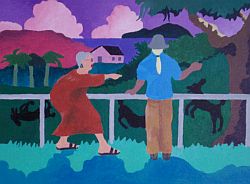 Then off Mrs. Gray went with the pup in the back.

"What should I name you? You are very black. 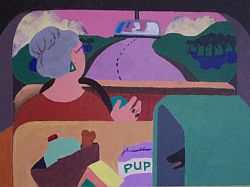 Robert greeted her in front of the house.

He opened the car door and took the crate out.

"What have we here?" he peered inside.

"I'll take him inside and make a place for his bed." 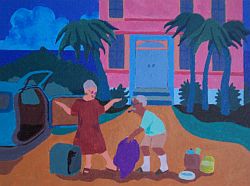 So Charles, Black Charles (that wasn't so hard)

Where he ran and ran for hours and hours

And when he got tired, he ate all the flowers.

Mrs. Gray was quite upset.

"What will I do with this mischievous pet?"

Black Charles has eaten one of your shoes!"

And then he ate the other shoe.

But then, I couldn't have worn just one!" 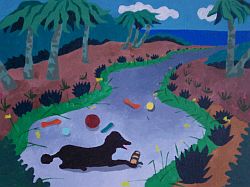 So they hid all the things that Charles might chew,

The phone book, small rugs, the lamp cords, too.

Small tables, a hat rack, some cushions, a chair--

"Now that everything's hidden, the room looks quite bare!"

And while they were clearing the house of all chewables,

Charles in the yard was digging some new holes. 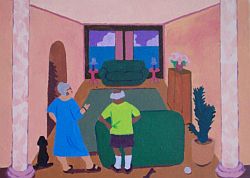 Mrs. Gray asked Robert, "What shall we do?"

So the next day Mrs. Gray and Black Charles enrolled.

"He'll learn to behave and our problem is solved!"

"Welcome to Puppy School! My name is Sara Towners,"

The red-haired woman said to the pups and their owners.

"We will learn how to walk with the leash today

And tomorrow we'll learn how to sit and to stay."

By the end of the week, to Mrs. Gray it was clear

That Black Charles would need Puppy School for a year.

"Just practice and practice. He'll get it some day!" 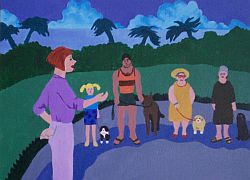 So day after day they walked and they sat,

They lied down, they stayed and then walked after that.

Then went in the yard and dug another hole. 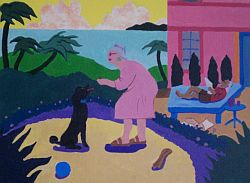 A month went by and Mrs. Gray

Had to go to the hospital for an X-Ray.

So, Robert said he'd take care of the pup,

And when Charles ate a shrub, Robert tied him up.

Charles pulled at the rope and pulled very hard,

In the noon sun, it was hot in the yard!

He barked and barked, "How rude! How rude!

I'm here with no water, no shade and no food!" 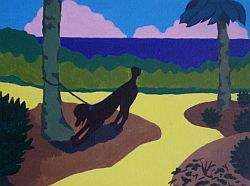 But Robert had gone on the bus to Kent

And on the way, the bus had an accident!

And to the hospital all the passengers were taken,

Mrs. Gray saw that Robert was really quite shaken.

"The bus ran into the back of a truck!

And I left Charles in the yard tied up!" 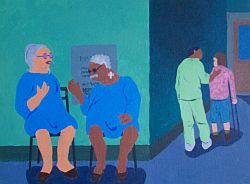 But Sara's phone was busy and busy,

And Charles in the sun was getting dizzy.

Then he heard a noise on the front lawn.

Someone had noticed the car was gone!

Someone was climbing into a window on the side!

Charles tugged hard at the rope and it came untied!

Black Charles eyed the fence then took a giant leap.

He cleared it and landed in a heap! 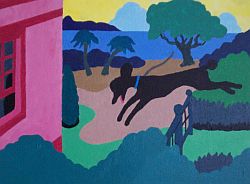 The window was open--there was someone inside!

Charles' nose said--a stranger. This could not be denied.

Another leap and Charles entered--"Barka! Barka!"

The robber was putting two candlesticks into his parka.

With another leap, Charles brought the robber to the floor

Just as Sara came in the front door.

And so Charles stayed, and so the man did.

She called the police who arrived in a minute

Then drove away in their squad car with the robber in it.

To Mrs. Gray I'll have quite a story to tell!" 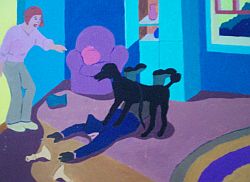 Mrs. Gray returned from the hospital (her X-Rays were fine.)

And then Robert returned to hear all the news,

(He had a small cut and one little bruise.)

Then they sat in the back yard, having some tea

And Charles was digging a hole, oh, dear me! 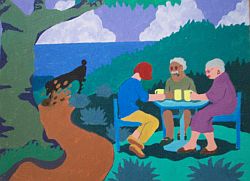 E-mail your questions and comments about my stories to me. I'd love to hear from you!

...I currently I'm working with a author for children's books and I'm doing some of the illustration. This has been a real challenge, but enjoying it. When I not at home my sketch pad goes with me and I'm practice on something all the time. I've taken my art more serious and have the time to do what I thought I would never be able to do and you have inspired me to make me realize a dream that I thought I wouldn't get to do in my life time. Will be sending a picture for you to look at and see where I need to do to improve. It may take a week or two, but you will hear from me. Janice

I'm 60 and just getting back into art. My mother was an artist and I always wanted to be one too. I like the (acrylic) painting and I'm just finishing up the Intermediate! Never though I could paint so good! Eleanor Fuller

Hello Lois....In your introductory e-mail you asked about who I am. I'm retired. As I watched my triplet grandchildren drawing and creating fine looking artwork, I got to thinking about how much I had enjoyed drawing when I was about their age. My recollection is that I was pretty good but in truth probably not as good as my aging memory recalls. I do know, though, that I enjoyed it very much. So one day I sat down with paper and pencil to sketch a masterpiece only to find that all the talent I had as a teenager had been lost somewhere on my journey to senior citizenship. The desire, if not the ability, was there so I began searching the net for drawing lessons. I was surprised to find sites that actually provided free lessons. (I fully expected to pay for lessons) I was most impressed with your site so here I am....hoping to reawaken a long suppressed interest in the art of drawing.

It's never to late to do art! I've been painting with water color and then did some little cards for my twelve year old niece.

Thank you for your art lessons,

Notes on Writing The Artist Within Lessons...

Five years ago, for a small business course at a community college I developed a financial plan for "The Artful Life Program," a series of art learning classes for 55+ students.

This offering of art classes could be installed in a community recreation center, a church basement, an instructor's house, or wherever people wanting to learn and do art could congregate.

I had to do the financials, figure out what would be needed to teach in a facility and project an income and expense sheet for its operation.

I came a way from the small business class with a good working plan for bringing art to the 55+ community. One of the classes I called "Finding The Artist Within." Based on my experience with teaching older people, the course was constructed to refresh, inspire and develop creative skills through a series of exercises. I made each project simple, fun and provocative and directed towards an end goal of helping the students choose an artful direction in painting, drawing, printmaking, or collage.

Through six lessons, students could develop their imaginative, visualizing and creative skills will working on projects that were fun for the group and not intimidating.

Over the years, I have taught "Finding The Artist Within," in in private classes as well as life-long learning programs. It remains today, one of the most popular class offerings I have!